A salivary mucocele, also known as a sialocele, is an accumulation of saliva that has leaked from an injured salivary gland or salivary duct. This leaked saliva accumulates within the tissues of the mouth and neck, resulting in a soft, painless swelling. 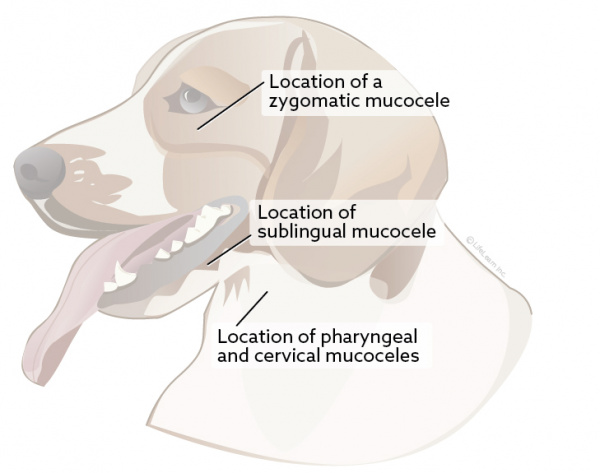 The type of salivary mucocele that a dog develops is important, because it affects the impacts that mucocele may have and plays a significant role in determining the correct treatment.

What causes a salivary mucocele?

Salivary mucoceles are caused by trauma to a salivary gland or salivary duct. In most cases, the cause of trauma is not identified. Potential inciting causes may include bite wounds, chewing on sharp objects, and the use of choke collars, all of which may damage a salivary gland or duct. Even a sudden stretching or jerking of the neck could stretch a salivary duct to the point of injury.

Once damaged, a salivary gland or duct begins to leak small amounts of saliva into the surrounding tissue. This saliva causes inflammation, which leads to further damage of the salivary gland or duct. Although a salivary mucocele often develops slowly and subtley, it will continue to worsen over time due to increased saliva accumulation and inflammation. Salivary mucoceles are almost exclusively seen in dogs; this is a very rare condition in cats. Predisposed dog breeds include German Shepherds and Miniature Poodles, although other breeds may also be affected.

"Salivary mucoceles are almost exclusively seen in dogs; this is a very rare condition in cats."

What are the signs of a salivary mucocele?

A cervical mucocele is often visible as a soft, nonpainful mass that grows slowly over time in the head or neck area. A zygomatic mucocele will appear as a swelling on the cheek, below the eye. Dogs with a cervical or zygomatic mucocele typically do not show any signs of illness, except for the visible swelling.

How is a salivary mucocele diagnosed?

Your veterinarian will begin by palpating any visible swellings on your dog’s head and neck. Most salivary mucoceles can be readily identified on palpation, with the exception of pharyngeal mucoceles. In the case of a pharyngeal mucocele, your veterinarian may need to examine your dog’s throat under sedation or general anesthesia. The diagnosis of a salivary mucocele is typically confirmed by aspirating the swelling. Your veterinarian will insert a needle into the swelling, in order to withdraw fluid for examination under a microscope. Performing a microscopic examination of this fluid will allow your veterinarian to confirm the diagnosis and rule out other causes of swelling, such as an abscess or cancerous mass. In some cases, advanced laboratory testing may be required.

What is the treatment for a salivary mucocele?

Surgical treatment of a salivary mucocele involves removal of the affected salivary gland(s). This procedure is referred to as a sialoadenectomy. In many cases, two salivary glands (the mandibular and sublingual salivary glands) are removed simultaneously, because both glands share a common salivary duct. This is a highly technical surgery, due to the number of significant vessels and nerves surrounding the salivary glands. Therefore, you may be referred to a surgical specialist for this procedure.

In the case of a sublingual mucocele, or ranula, your veterinarian may recommend marsupialization. This surgical procedure creates an opening through which the saliva that is trapped under the tongue can easily drain into the mouth. Marsupialization may be recommended in place of or in addition to removing the affected salivary glands.

What is the expected recovery after a sialoadenectomy?

The prognosis after surgery is excellent. Postoperative complications are uncommon following sialoadenectomy. The most common complication is the development of a seroma, or small bubble of fluid, at the surgery site. Rare complications include nerve damage, excessive bleeding, recurrence of the mucocele, and infection.

Your veterinarian will provide you with instructions for your dog’s postoperative care. Your dog may have a surgical drain and/or skin sutures that need to be removed, as well as bandages that must be changed. Your dog will probably also need to wear an e-collar (cone) for two weeks after surgery, to reduce the likelihood of scratching the incision and causing damage. Additionally, you will need to give pain medications and possibly antibiotics, as directed by your veterinarian.