My dog has been bitten by a snake. Will he die?

It depends on the species of snake. There are approximately three thousand species of snakes in the world with less than five hundred venomous species. In North America, there are about twenty-five species of venomous snakes; the most common include Rattlesnakes, Copperheads, Cottonmouths (water moccasins), and Coral snakes.

What are the signs of snakebite?

In dogs bitten by a non-venomous snake, swelling and bruising around the bite are the most common clinical signs. In some cases, it may still be possible to see the paired puncture wounds from the fangs in the center of the wound. The bite may be very painful and may become infected if not treated by a veterinarian. There will be very little progression of the swelling unless infection develops. Most swelling resolves within forty-eight hours in uncomplicated cases. 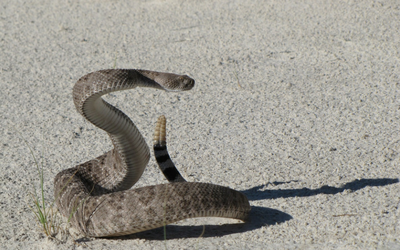 The clinical signs associated with a venomous snakebite vary based on the species of snake. As a general rule, there is extensive swelling that often spreads quickly. Bleeding or a bloody discharge often occurs at the site of the bite. The puncture wounds from the fangs may not be visible due to either the rapid swelling or the small mouth size of young or small snakes.

"The puncture wounds from the fangs may not be visible due to swelling or the small mouth size of young or small snakes."

The venom of most North American pit vipers (rattlesnakes and cottonmouths) contains toxic protein components, which produce local and systemic effects. These effects may include local tissue and blood vessel damage, hemolysis or destruction of red blood cells, bleeding or clotting disorders and lung, heart, kidney, and neurologic defects. Pit viper venom can cause shock, hypotension (low blood pressure), and lactic acidemia (a disturbance in the pH of the blood). The venom of most North American pit vipers causes only minor neuromuscular disease, although Mojave and Eastern diamondback rattlesnake venom may cause serious neurologic deficits.

Coral snake venom contains primarily neurotoxic components (components that are toxic to the neurologic system), which result in neuromuscular damage. There are often minimal symptoms and signs seen at the bite site.

How is a diagnosis of snakebite envenomization made?

Diagnosis is primarily made on medical history and clinical signs. If the type of snake is unknown, diagnosis and treatment will be directed at the presenting clinical signs.

What first aid treatment should I do on my way to the veterinarian?

First aid is aimed at reducing rapid spread of venom in the body.

What is the treatment for snakebite envenomization?

Venomous snakebites are medical emergencies requiring immediate attention. Before treatment is begun, it must be determined whether the snake is venomous and whether envenomization occurred. Fortunately, a venomous snake may bite and not inject venom (dry bites occur in about 20-30% of pit viper bites and in about 50% of all of coral snakebites).

When no envenomization occurs, or if the bite is inflicted by a non-venomous snake, the bite should be treated as a puncture wound. Non-venomous snakebites are generally treated with wound cleaning, antibiotics, anti-histamines and anti-inflammatory medications as indicated.

"The correct treatment of venomous snakebites depends on the type of snakebite."

The correct treatment of venomous snakebites depends on the type of snakebite.

Copperhead envenomization is usually treated with a combination of antibiotics, anti-histamines, and fluid therapy to counter potential hypotension or shock.

Treatment to counter shock, low blood pressure, infection and respiratory distress is necessary in most cases of venomous snakebites.

What is the prognosis for a dog bitten by a snake?

The prognosis depends on several factors, including: the size and species of the snake, the amount of venom injected, the number of bites, the location and depth of the bite (bites to the head and body tend to be more severe than bites to the legs or paws), the age, size, and health of the dog, the time elapsed before treatment, and the dog's individual susceptibility to the venom. The location of the bite is important. Swelling from bites around the muzzle and face can lead to breathing difficulties due to obstruction of the airway.

How can I prevent my dog from being bitten by a snake?

Most snakes will try to avoid people and pets. If you see a snake, the best thing to do is avoid it. When out hiking, stay on open pathways and keep away from snake resting places such as holes, logs, or rocky outcrops. Ideally it is best to keep your dog on leash to prevent startling a snake. Since rattlesnakes are nocturnal, try to hike during the daytime when it is safer. Learn about snakes in your area so you can easily identify the snake and its potential danger.