The Colubridae comprise the largest family of snakes, with over one thousand species. The vast majority are harmless, although they can bite. Some colubrids are small insectivorous species, while others can be larger (constrictor snakes such the racer and the indigo snake). Many are colorful and very attractive. Colubrid snakes make excellent, fairly easy-to-care-for pets.

Some of the more popular colubrid snakes are described below. 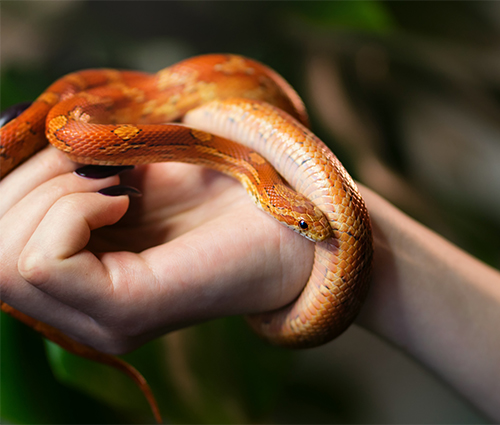 This readily available snake, Elaphe guttata, is a yellow to gray snake with a series of red to brown circumferential marks. Color morphs are now available in a variety of color variations, which range from grey to bright orange to a ghost color formation. Corn snakes are typically easy to handle, generally docile, and relatively low maintenance. They are a manageable size and adapt to captivity very well. Adult corn snakes may reach a length of 4-6 feet (1.2-1.8 m) with optimum diet and housing. They make excellent pets. Mice should make up the majority of their diet. They should be housed at a temperature of 25-30°C (77-86°F), although they can withstand marginally cooler weather in winter. Corn snakes breed well in captivity, with around 10-15 eggs in a clutch. If incubated at 28°C (82°F), these hatch in around 70 days and, if big enough, will take newborn pinky mice straight away. After 2-3 years they reach sexual maturity. 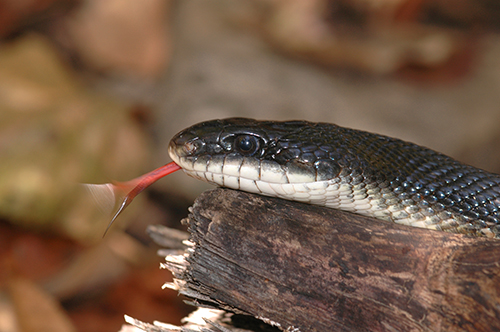 A number of sub-species of Elaphe obselata are available, ranging from the dark Texas rat snake, to the black rat snake with its white chin, to the slender yellow rat snake, to the orange Everglades rat snake, which is a beautiful orange color. All these subspecies are generally easy to maintain and take well to captivity. Most rat snakes are easygoing, but some individuals can be aggressive. The diet of adults consists of small rodents. Being arboreal (live in trees), they require branches on which to climb and rest.

These species, such as the common king snake Lampropeltis getulus, are well-marked with vibrant patterns on their skin and are robust animals. There are over 45 sub-species of king snakes. Adult snakes may reach lengths of 2-6 feet (0.6-1.8 m). They generally require a large cage that should be kept at around 25-30°C (77-86°F) and although they rarely climb, they do benefit from having some form of a hiding space. Their food in captivity should be mice, which they constrict and eat. King snakes have been known to eat other snakes. Large and small king snakes should not be housed together, for fear of ending up only with a lesser number of well-fed larger snakes! When stressed or frightened, king snakes may emit a ‘musk’ odor, which is thought to ward off predators. 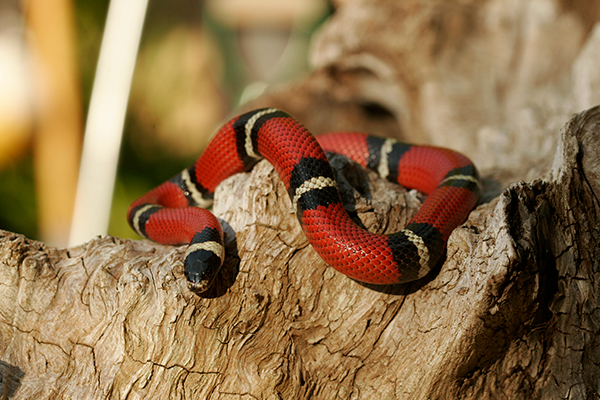 Lampropeltis triangulum is a member of the king snake family. It is a tricolored snake with yellow, black and red circumferential rings. They resemble the poisonous coral snake, but are differentiated from them by the arrangement of the 3 colors. Remember, "red and yellow kill a fellow, red and black venom lack".

It is generally felt that they are rather more delicate than other Lampropeltis species and since they come from quite a wide geographical range, they need corresponding variation in temperature. Northern species can be hibernated at 6-10°C (42-50°F) while southern species only tolerate a drop of 5-10°C (41-50°F) from their normal temperature range. They are opportunistic eaters and eat a variety of animals, but are kept well in captivity on a diet of small rodents. They obtained the name milk snake because they are commonly found around barns. However, they are not looking for milk; instead, they are hunting for mice that live around the barn. 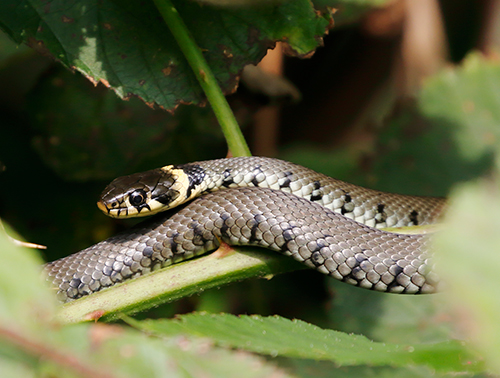 This olive green snake, Natrix natrix, is a native of Great Britain. Although it exists happily at temperatures found in the UK, some individuals do not adapt to captivity well. The snake requires a diet of fish and amphibians. It is not a good choice for inexperienced snake owners because of this tendency for poor adaptation. 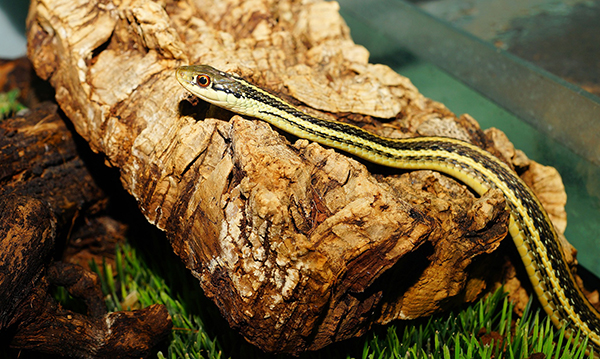 There are many species of the genus Thamnophis. The garter snake is generally easy to care for, responds well to handling, and is active and diurnal (awake during the day), making them ideal snakes in captivity. Thamnophis marcianus, the checkered garter snake, is a particularly attractive snake. Although it may be found in dry regions of North and Central America, garter snakes always require water. Western sub-species are more terrestrial in habit than are the eastern sub-species of the common garter snake. Garter snakes may eat slugs, insects, earthworms, lizards, amphibians (frogs), birds, fish and rodents.