The Effects of Secondhand Smoke on Pets 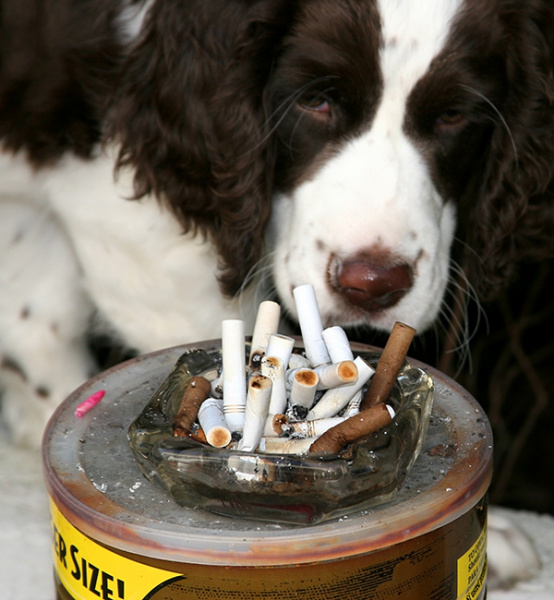 Most people are well-educated about the dangers of smoking. They understand the potential health risks involved every time they light up. They likely realize that these risks extend to nearby people who inhale their secondhand smoke. But do they know that secondhand smoke can similarly affect their cats, dogs, and birds? Do they understand that pets can suffer the negative health consequence of tobacco products by simply breathing the air circulating around their owners as they puff away?

What is secondhand smoke?

People who inhale the smoke of tobacco products take “firsthand” smoke into their lungs. Secondhand smoke is the smoke inhaled by non-smokers from one of two sources: the smoke produced by the burning end of a cigarette, cigar, or pipe OR the smoke exhaled by the smoker who inhaled it in the first place. Direct contact with a tobacco product is not necessary to be exposed to the dangers of smoking.

"Direct contact with a tobacco product is not necessary to be exposed to the dangers of smoking."

Why do we care about secondhand smoke?

Tobacco smoke contains more than 7,000 chemicals, many of which are toxic or cause cancer. Simply breathing in the vicinity of an active smoker increases exposure to these dangerous compounds. Understanding that secondhand smoke impacts human health is important, but conscientious pet owners need to know that secondhand smoke affects pets, too.

What are the effects of secondhand smoke?

In people, secondhand smoke has been associated with respiratory problems ranging from coughing and sneezing to asthma and shortness of breath. Respiratory infections, like bronchitis and pneumonia, are also more prevalent in people breathing tobacco-related toxins. The danger extends to an increased risk of lung cancer, stroke, and heart disease.

"Living in a house with a smoker puts dogs, cats, and especially birds at greater risk of many health problems."

However, secondhand smoke is not just dangerous for people…it is also dangerous for pets. Living in a house with a smoker puts dogs, cats, and especially birds at greater risk of many health problems.

Dogs exposed to secondhand smoke have more eye infections, allergies, and respiratory issues, including lung cancer. This makes sense when you realize that a dog's sense of smell is significantly better than people. A study at Colorado State University demonstrated that dogs living in smoking environments also had an increased incidence of nasal cancer. Interestingly, the length of a dog’s nose is associated with the type of cancer incurred from inhaling secondhand smoke.

"...the incidence of nasal tumors is 250% higher in long-nosed dogs living in smoke-filled environments."

Cats that live in a smoky environment are at greater risk of developing asthma and lung cancer, which makes sense because cats have short noses. Unrelated to nose length, felines that inhale secondhand smoke also have a higher incidence of lymphoma. Cats exposed to smoke are about two times more likely to develop lymphoma, a cancer of the lymph nodes that carries a poor prognosis for survival. That rate increases with the length of time a cat lives in a smoky household.

“Cats that groom excessively develop tumors in their mouths from licking off toxic particles that accumulate on their fur."

As if secondhand smoke is not bad enough, cats suffer health consequences from “thirdhand smoke”, which is the residue that clings to furniture, rugs, and pet fur long after the air in the room is cleared. Cats that groom excessively can develop tumors in their mouths from licking off toxic particles that accumulate on their fur from smoke-filled air. These tidy felines expose the mucous membranes in their mouths to carcinogens that cause oral tumors. Good hygiene is not healthy in this case. Birds are other pets that are affected by secondhand smoke. Birds have respiratory systems that are extremely sensitive to airborne pollutants, making them very likely to develop respiratory problems (pneumonia) and lung cancer when exposed to secondhand smoke. These feathered pets also have a higher risk of skin, heart, eye, and fertility problems when housed in smoky environments.

Our pets motivate us to do many things that subsequently affect our health. We put down our forks and stop eating our dinner to fill their food bowls when they are hungry. We interrupt our favorite television show to take them for a walk when they need a potty break. Basically, our pets motivate us to eat less and exercise more! How healthy is that?

They further improve our health by motivating us to stop smoking. Knowing that smoking is bad for our health may not be enough to make us quit, but knowing that it may have a negative impact on our pet’s health just might be the jump-start we need to kick the habit. A study conducted at the Henry Ford Health System in Detroit demonstrated that 28.4% of smokers said they would try to stop smoking after learning that secondhand smoke was detrimental to their pets’ health. And 8.7% claimed that they would motivate their partners to quit, too!

"...there is no risk-free level of secondhand smoke."

Putting down that cigarette, cigar or pipe is hard to do. Some pet owners opt to take their smoke breaks outside and reduce their pets’ exposure to secondhand smoke. Others open windows and use special air filters in the house. These tactics help, but keep in mind that there is no risk-free level of secondhand smoke. Even minimal exposure can negatively impact cats, dogs, and birds. So, get motivated for your pet’s sake and for yours, too!