Should punishment be used in cats?

Punishment is the application of a stimulus that decreases the chance that a behavior will be repeated. It must coincide with the undesirable behavior, and must be unpleasant enough to deter the cat from repeating that behavior.

Inappropriately applied punishment can cause fear, anxiety and owner avoidance, making punishment the least desirable tool for changing behavior (also see our handout on 'Behavior Modification - Why Punishment Should be Avoided'). Keep in mind that you are punishing the behavior, not the cat. Punishment should never be considered unless the pet has the means to satisfy its nature and its needs. For example, the scratching cat should be provided with an appropriate scratching post before any attempts to punish undesirable scratching are initiated.

When is a physical reprimand acceptable?

Physical reprimands are one of the most frequently utilized and least successful forms of punishment. Hitting a cat can lead to hand-shyness, fear of the owner, and potential injury for both the owner and the cat. Depending on the problem, the cat will likely continue to perform the undesirable behavior in your absence since it learns that it can perform the behavior without punishment when you are out of sight. Physical punishment is generally ineffective, potentially dangerous and likely to have a negative effect between the owner and pet.

What can I do to stop my cat from engaging in rough play with me?

A light tap on the nose or top of the head has been advocated for owner directed behaviors such as play biting, hissing and swatting. However, even these mild forms of punishment can lead to retaliation, fear and an increased level of aggression in some cats, and cannot therefore be universally recommended. At the very least they tend to make the cat wary of your approach. Instead, whenever the cat begins to swat or play attack, immediately stop the play by walking away or by using some non-physical form of punishment such as a water sprayer, can of compressed air, cap gun, hand held alarm or perhaps a loud hiss. Although ideally you should just walk away from these forms of playful behavior to ensure that they are not reinforced, many cats will continue to pursue as part of the play and chase. Before any punishment is considered, the cat should be given ample opportunities for social play. Toys that can be chased, swatted, and batted should be provided (See our handouts on 'Play and Play Toys in Cats' and 'Aggression in Cats – Play Predation'). Species appropriate punishment such as "hissing" or the use of a punishment devices such as a water sprayer, can of compressed air, or hand held alarm are better than using any physical techniques since they are less likely to lead to fear and retaliation. There may be times when gently shaking or lifting the cat by the scruff of the neck can be used to successfully calm, distract or restrain a cat but only to disrupt undesirable behavior and not as a punishment. Remember that giving any form of attention to a cat that is swatting, or attacking in play, might, at the other extreme be misconstrued as play, and further reinforce the behavior.

How can I discourage my cat from other behaviors?

The key to successfully stopping undesirable behavior is to associate an unpleasant consequence with the undesirable behavior. However, unless the owner remains out of sight while administering punishment the cat may learn to cease the behavior only when you are present. Punishing the cat remotely, while you remain out of sight, is an effective means of deterring undesirable behavior. However, it takes preparation, time and forethought. Another effective means of punishment is to booby-trap an area, so that the cat learns to "stay away". Keep in mind that the cat must also have appropriate outlets for play, exercise, scratching, climbing, jumping and chasing.

For remote techniques to be successful there are two key elements. First, you must monitor the cat while out of sight so that you know when the problem begins. The second element is that the punishment must be delivered while the inappropriate behavior is occurring (and while you remain out of sight).

Keep a close watch on the problem area while hidden around a corner, in a nearby closet, or behind a piece of furniture. Or, monitor your cat using an intercom, a motion detector or even just a set of bells that might "jingle" when disturbed.

As soon as the cat enters the area or begins to perform the undesirable behavior (climb, scratch), use a long-range water pistol, noise device or remote control device (see below) to chase the cat away.

If the cat cannot determine where the noise or water is coming from, it should quickly learn to stay away from the area whether the owner is present or not.

A commercial remote device is the citronella spray collar. It can be attached to a harness on the cat or just placed in the area and activated remotely as the cat enters the area. Another option is to set up a remote control switch near the problem area and have a device such as a water pik, alarm, or hair dryer plugged in.

When the owner is not around to supervise and monitor, booby-trap devices can be utilized or the cat should be confined to an area of the home that has been cat-proofed and supplied with a litter box, bedding area, toys for play and areas for scratching or climbing. 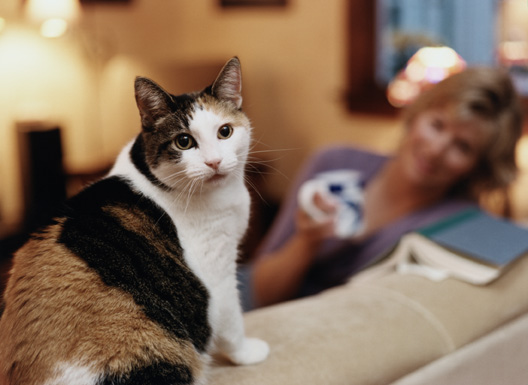 How can I booby-trap the environment to punish the pet?

Punishing the behavior remotely, with you out of sight, is impractical if the cat cannot be prevented from performing the undesirable behavior when you are not there to supervise and monitor. Booby-traps are a way of teaching the pet to avoid the area or the behavior itself. One of the simplest ways to discourage a cat from entering an area where an undesirable behavior is likely to be performed (scratching, eliminating) is to make the area less appealing (or downright unpleasant) for scratching or eliminating. If the cat is scratching furniture, a large piece of material draped over the furniture may do the trick, since the cat won't be able to get its claws into the loose fabric. A small pyramid of empty tin cans or plastic containers could also be balanced on the arm of a chair so that it topples onto the cat when scratching begins. A piece of plastic carpet runner with the "nubs" facing up can be placed over a scratched piece of furniture to reduce its appeal; a few strips of double-sided sticky tape would send most cats looking for another place to scratch (hopefully to the scratching post!). Mousetrap trainers, shock mats, or motion detector alarms are also very effective at keeping cats away from problem areas. There are devices that are triggered by motion that will spray the cat with compressed air and startle them so they leave the area (See our handout on 'Scratching Behavior in Cats'). For outdoor use, there are motion detector sprinklers, a motion activated compressed air spray, and a variety of sonic and ultrasonic motion detectors (See 'Behavior Management Products' handout for more details).

"To be effective, the first exposure to a product must be as repulsive as is humanely possible, so that the cat is immediately repelled whenever it smells or tastes that product again."

Most of these same booby traps would also be effective for destructive behaviors such as chewing and sucking. Taste deterrents might also be helpful, provided they are unpleasant enough to deter the behavior. Products such as bitter apple, bitter lime or Tabasco sauce are often recommended, but many cats quickly learn to accept the taste. A little water mixed with cayenne pepper, oil of eucalyptus, any non-toxic mentholated product, or one of the commercial anti-chew sprays often work. To be effective, the first exposure to a product must be as repulsive as is humanely possible, so that the cat is immediately repelled whenever it smells or tastes that product again. Therefore a spray of the bitter spray into the cat's mouth might be most effective to reduce the chances of the cat returning to the area. Never leave any objects or areas untreated until the cat learns to leave the object or area alone.

Perhaps most important, punishment whether interactive or remote should never be a substitute for good supervision and the opportunity to engage in the proper behavior. This is very important with kittens that are learning what is acceptable in a new home. Prevention, by confining the cat to a cat-proofed area with toys, scratching post, litter and water, is often the best solution when the owners are not available to supervise.