What is von Willebrand's disease?

Von Willebrand's disease (vWD) is the most common inherited bleeding disorder of both humans and dogs. It is caused by a deficiency in the amount of a specific protein needed to help platelets (the blood cells used in clotting) stick together and form clots to seal broken blood vessels. The deficient protein is called von Willebrand factor (vWF).

Which breeds are most commonly affected by vWD?

At least thirty different breeds are affected, but the Doberman Pinscher is the breed with the highest incidence of vWD. Of 15,000 Dobermans screened in a research study, more than 70% were found to be carriers of the disease. Fortunately, most of these were not showing signs of the disease at the time of testing. However, the number of Dobermans with a history of bleeding appears to be on the rise. Although Dobermans are commonly affected, they usually have the mildest form of the disease. The average age at diagnosis for this breed is about four years of age.

"Although Dobermans are commonly affected, they usually have the mildest form of the disease."

Another study showed that 30% of Scottish Terriers and 28% of Shetland Sheepdogs had abnormally low concentrations of von Willebrand factor. Chesapeake Bay Retrievers and Scottish Terriers are affected with the most severe form of the disease.

What are some of the signs of vWD?

Many dogs with vWD never show outward evidence of having the disease. Others may spontaneously hemorrhage from the nose, vagina, urinary bladder, or oral mucous membranes. Prolonged bleeding after trauma or surgery is a common clinical finding, and bruising or bleeding after a surgical sterilization procedure (spaying or neutering) may be the first time any abnormality is noticed. Females may bleed excessively after giving birth. In affected dogs with uncontrollable bleeding, death may occur.

How is vWD diagnosed? 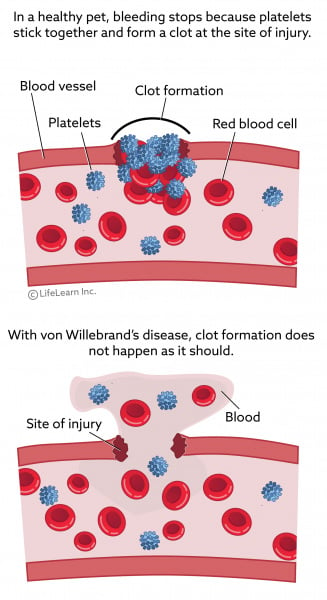 A screening test, called the buccal mucosal screening time, may be performed in the veterinarian's office. Prolonged bleeding with this test can raise the suspicion of the disease, especially in breeds known to be at risk. To confirm the diagnosis, the exact amount of von Willebrand factor present in the blood can be determined through a very accurate laboratory blood test. See handout "Von Willebrand's Disease Testing" for further information on diagnosing vWD.

"Some dogs do not become obvious bleeders until later in life."

Often, Dobermans may have undergone routine surgical procedures such as surgical sterilization, or cosmetic surgery such as tail docking as a pup. An uncomplicated recovery from such procedures does not eliminate the possibility that a dog may be affected with vWD. Some dogs do not become obvious bleeders until later in life.

Are there any situations that pose an increased risk if my dog is affected?

Certain medications may decrease platelet function and could increase the risk of spontaneous bleeding in von Willebrand’s patients. Some medications have been found increase the risk of bleeding in humans, but specific research has not been done in dogs; as such, the data from human medicine and human research has been extrapolated to companion animals. Your veterinarian is the best resource for determining the level of risk versus benefit for your dog. Drugs that may interfere with platelet function include:

"In humans with vWD, emotional stress appears to precipitate bleeding."

In humans with vWD, emotional stress appears to precipitate bleeding in some cases. The subjective nature of such a finding makes it difficult to know if there may be a similar association in dogs, although this remains a possibility. Clients with dogs diagnosed with vWD should try to maintain a stress-free lifestyle, and the dog should be monitored closely for bruising or bleeding if they travel, have houseguests, or other stressful events occur.

What can be done to treat dogs with vWD?

In an emergency situation, transfusion of blood or fresh frozen plasma may stabilize a bleeding patient. The dog donating blood may be treated with a drug called DDAVP prior to blood collection. DDAVP will raise the level of von Willebrand factor in the donor's blood, an obvious benefit for the dog with vWD.

Some dogs with vWD are able to increase the amount of von Willebrand factor in circulation after the administration of DDAVP, although the response is variable. At this time, it is not recommended to use this drug on a regular basis. The drug is expensive, and not all dogs will respond to it. Your veterinarian will discuss the treatment option and help you decide if it is an appropriate option for your pet's condition.

If I own a Doberman that has always been healthy, should I do something?

Since many affected Dobermans will never have bleeding problems, any recommendation to do routine screening testing is debatable. Identification of dogs that have abnormal bleeding times can be very valuable if surgery is planned. Additionally, knowing that your dog is a carrier of vWD can be very important if an injury occurs.

Screening for vWF is useful for breeders who strive to reduce the incidence of problems in their breed.