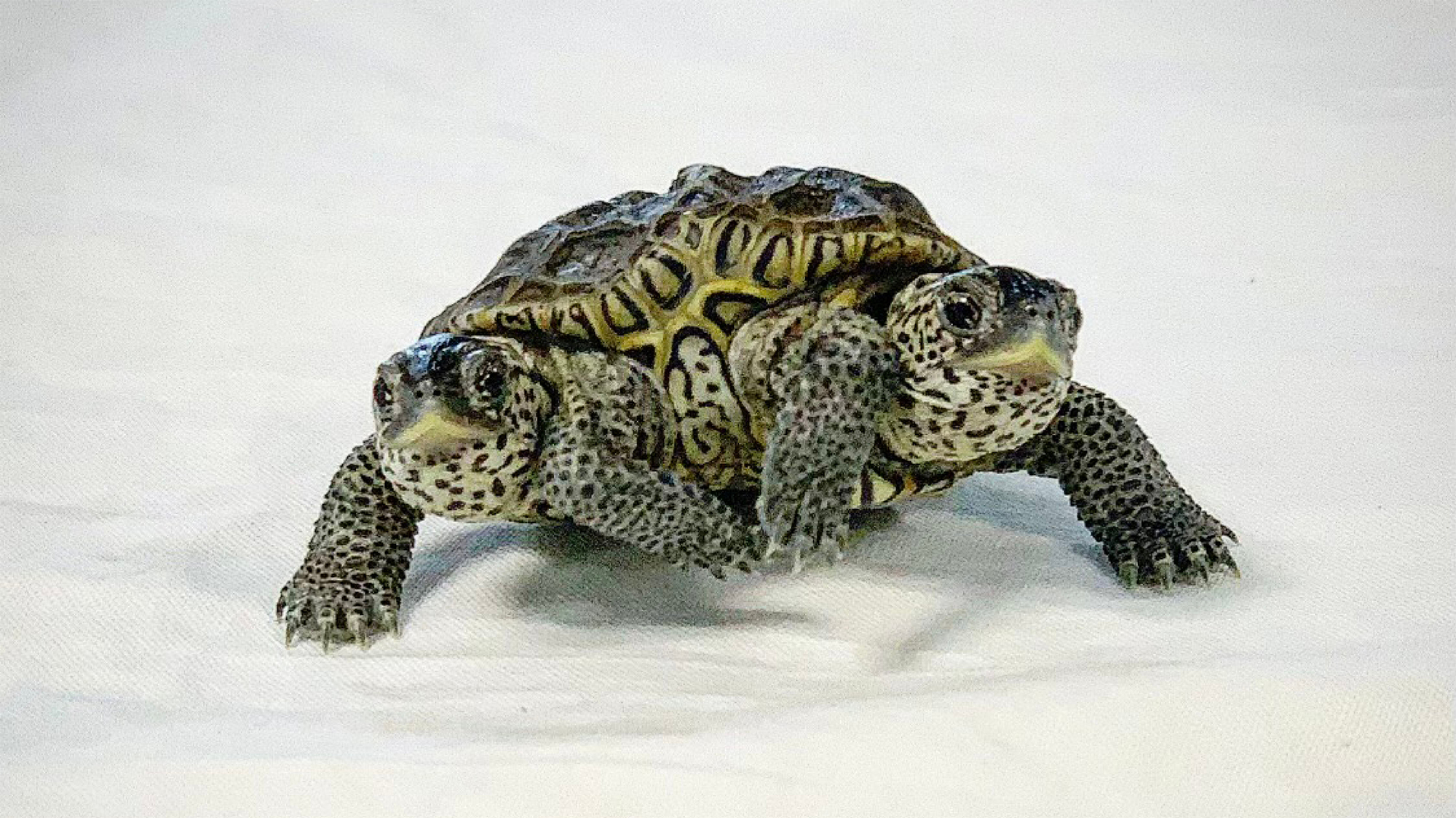 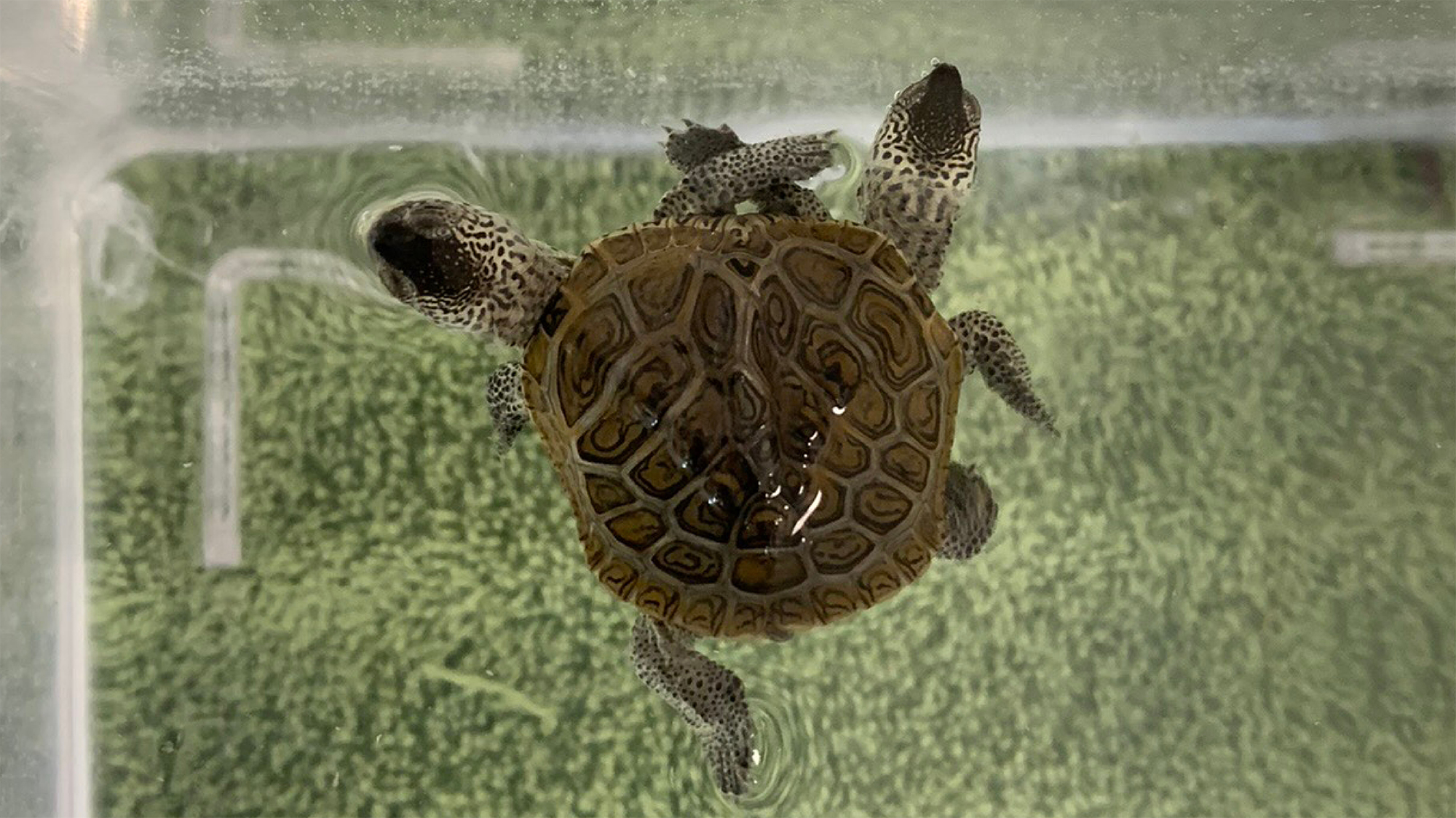 The diamondback terrapins, which have been affectionately nicknamed Mary Kate and Ashley by wildlife center staff, are considered a threatened species in Massachusetts. The turtles were hatched from a protected nesting site in Barnstable, MA in early October 2021, then transferred to the New England Wildlife Center for assessment and monitoring as they grew.

Bicephaly is a rare anomaly that can occur from both genetic and environmental factors that influence an embryo during development. Similar to conjoined twins in humans, they share parts of their body but also have some independent parts.

“Animals with this rare condition don’t always survive very long or live a good quality of life,” explains Katrina Bergman, CEO at the New England Wildlife Center. “We needed to be able to investigate their condition further with a CT scan.”

Since the New England Wildlife Center is a nonprofit organization that relies primarily on donations to fund their operations, a CT scan would have been too costly for their budget. Luckily for the turtles, Michael Bernstein, DVM, DACVIM, medical director emeritus at VCA South Shore, had heard about the turtles from his wife and jumped at the opportunity to help. 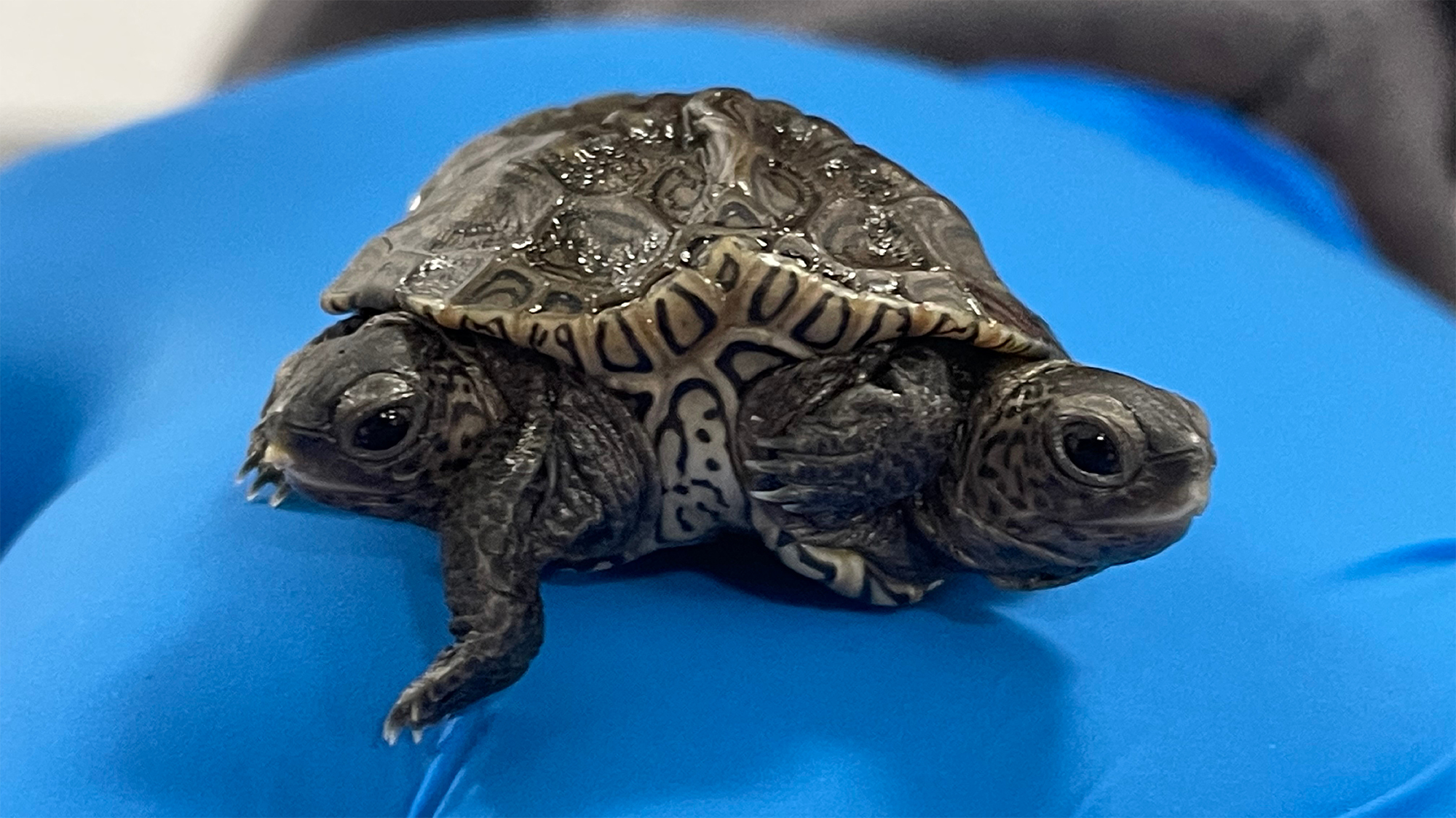 “If we need anything, like a critical supply item, they [VCA South Shore Weymouth} hare the first place we call, says Katrina. We will often refer critical cases that need high-level treatment to them because we know the quality of care there is phenomenal. Our vets often share cases and confer with each other.”

According to Katrina, this type of collaboration between VCA South Shore and New England Wildlife Center isn’t unusual. In fact, they enjoy a symbiotic relationship that has been in place for decades.

“If we need anything, like a critical supply item, they are the first place we call,” says Katrina. “We will often refer critical cases that need high level treatment to them because we know the quality of care there is phenomenal. Our vets often share cases and confer with each other.”

Mary Kate and Ashley’s CT scan took place in October 2021. It provided critical information about their likelihood of survival, as well as the opportunity to document information that will contribute to the body of knowledge about bicephaly.

Wildlife center staff had already observed that Mary Kate and Ashley are fused at the spine, have two heads and six legs. The CT scan revealed they have two hearts, two sets of lungs, and two digestive tracts.

Bright Outlook
According to Katrina, the turtles are bright and active. They’re eating, swimming, and slowly gaining weight. Wildlife staff observed that each turtle has control of three legs and seem to cooperate well. A supervised deep water swim test showed that they can coordinate swimming so that they can come to the surface to breathe when needed, which is key to their longer-term survival.

Between what they have been able to observe and the information gleaned from the CT scan, Katrina, Dr. Mertz and the rest of the wildlife center staff are cautiously optimistic about the turtles’ quality of life. They continue to monitor and study them, ensuring their best chance to thrive. And if needed, they know they can always call on VCA South Shore for help.

“It was both interesting and gratifying to be able to partner with New England Wildlife Center on this case,” says Dr. Bernstein. “I’m glad we were able to share our resources to help document an example of this rare condition.” 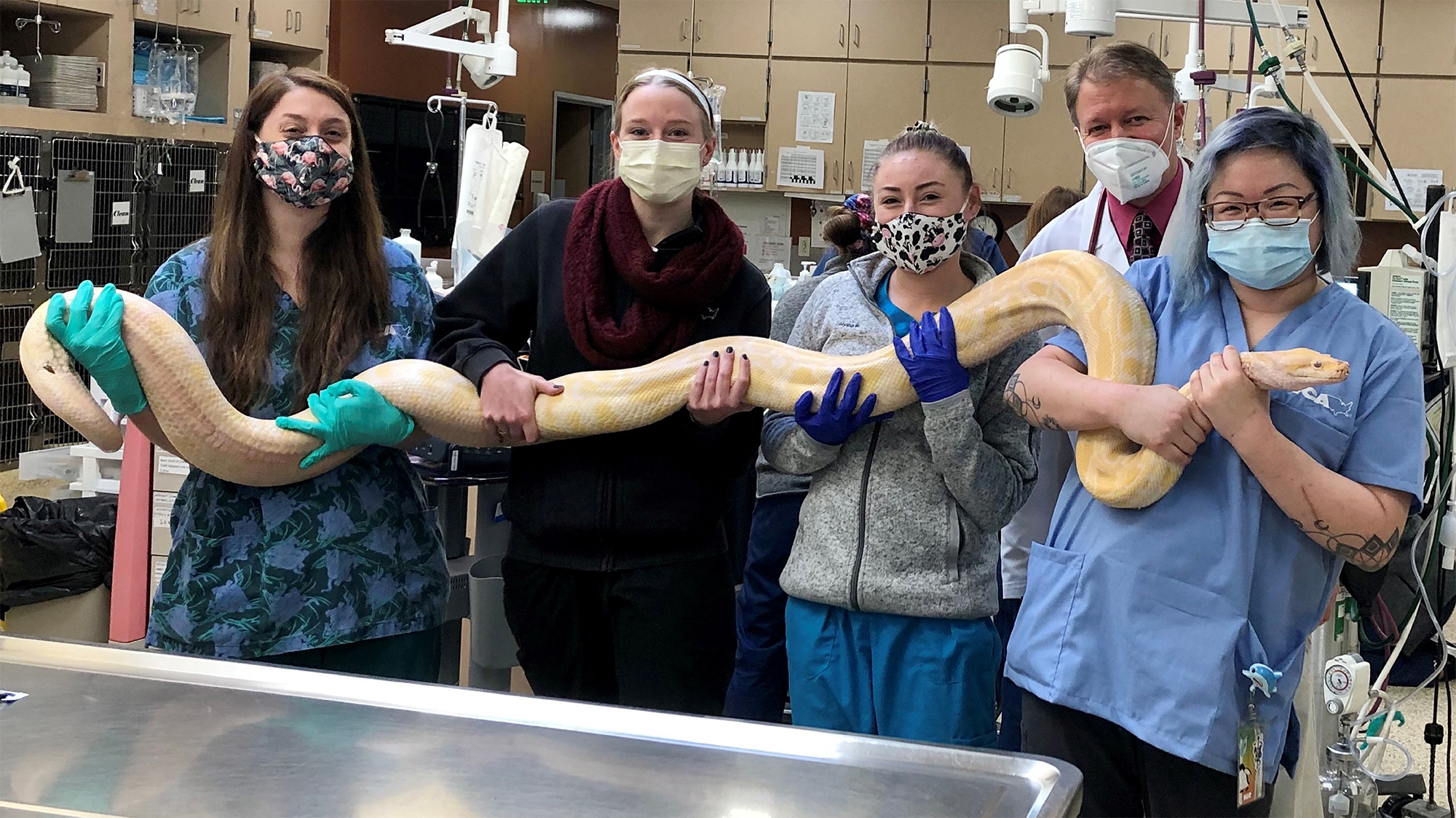 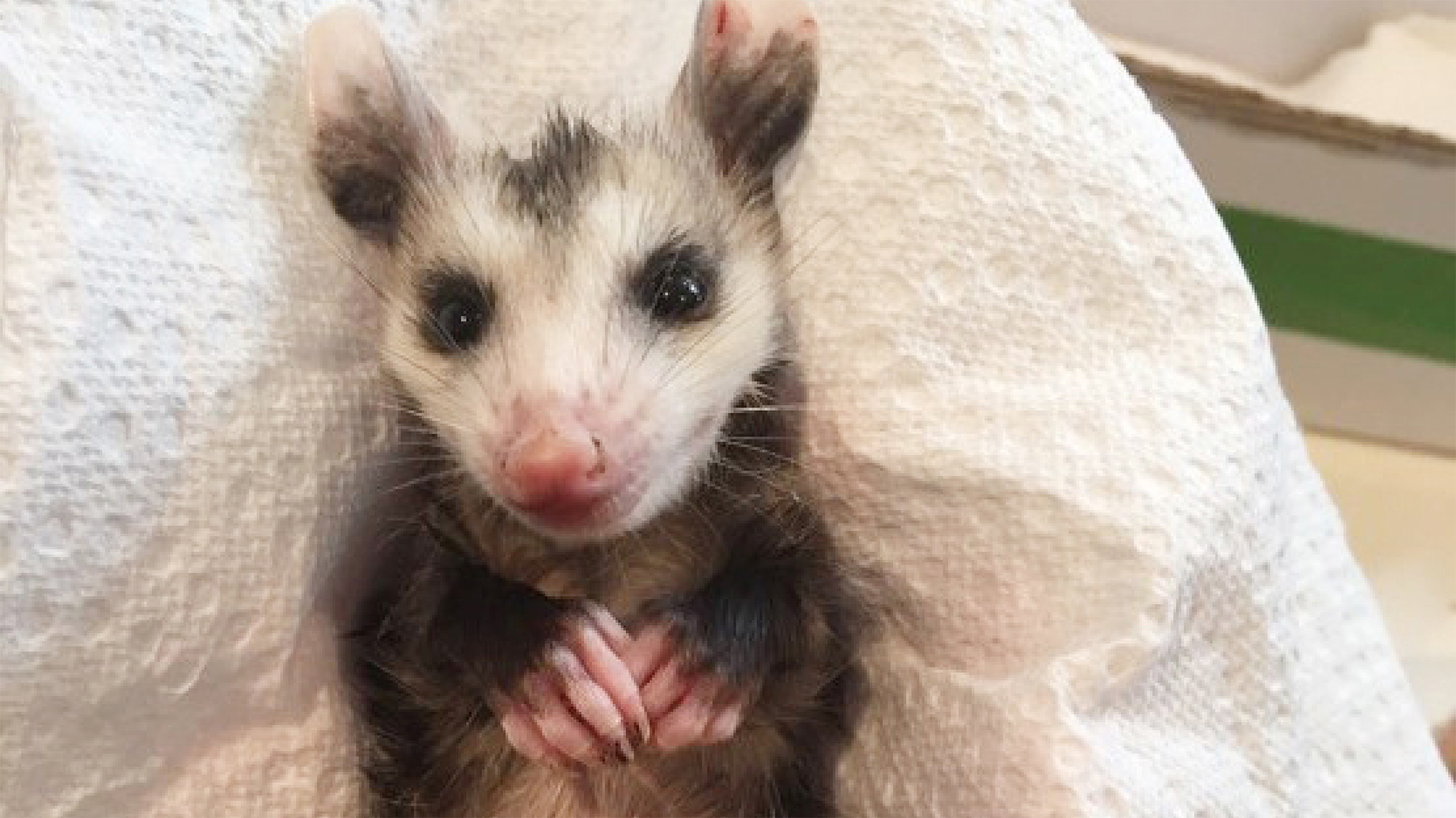 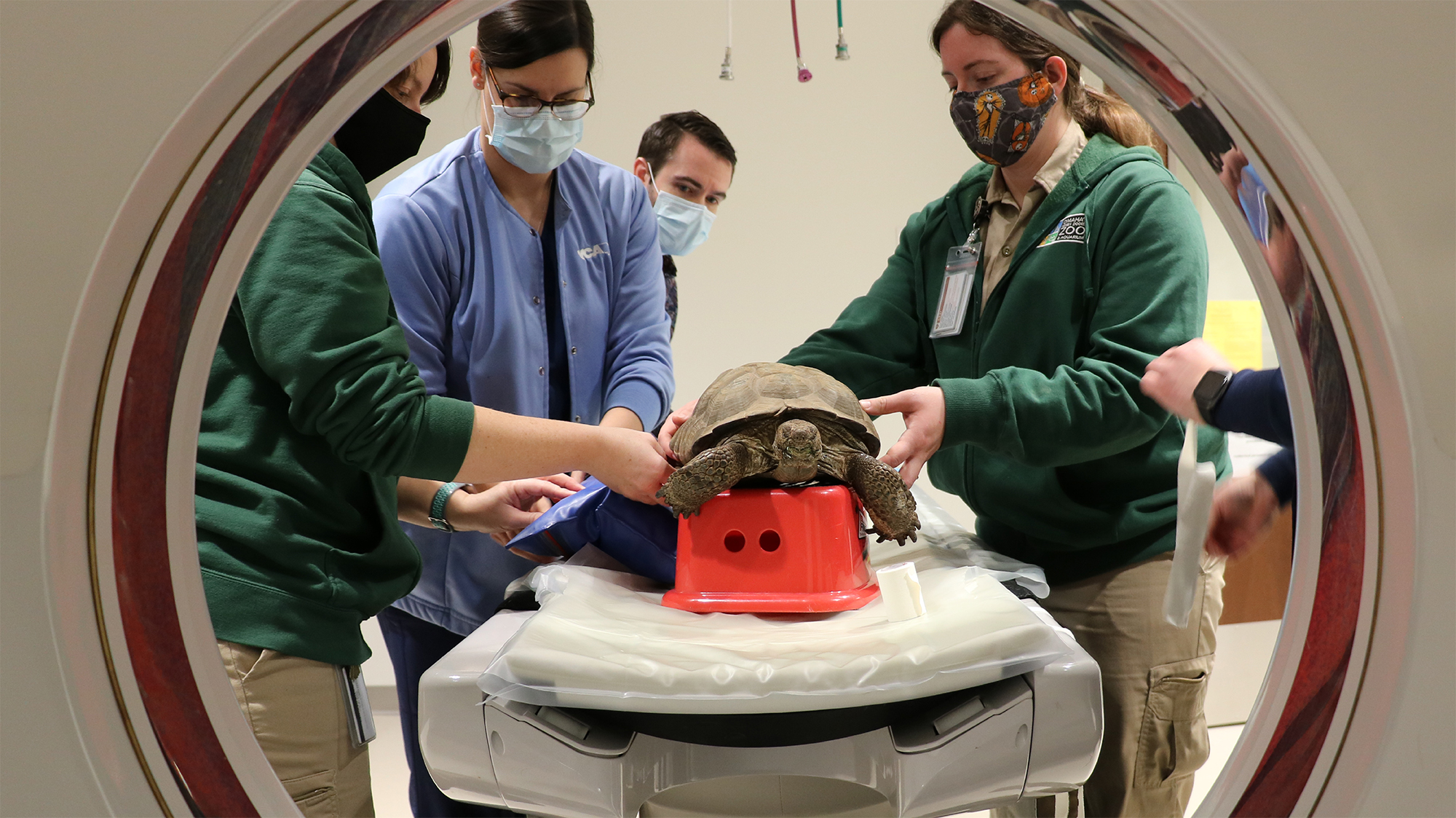