Getting a Dog Back to Work After a Back Injury

Neurosurgery and physical rehabilitation kept this Human Remains Detection dog happy, healthy and on the job. 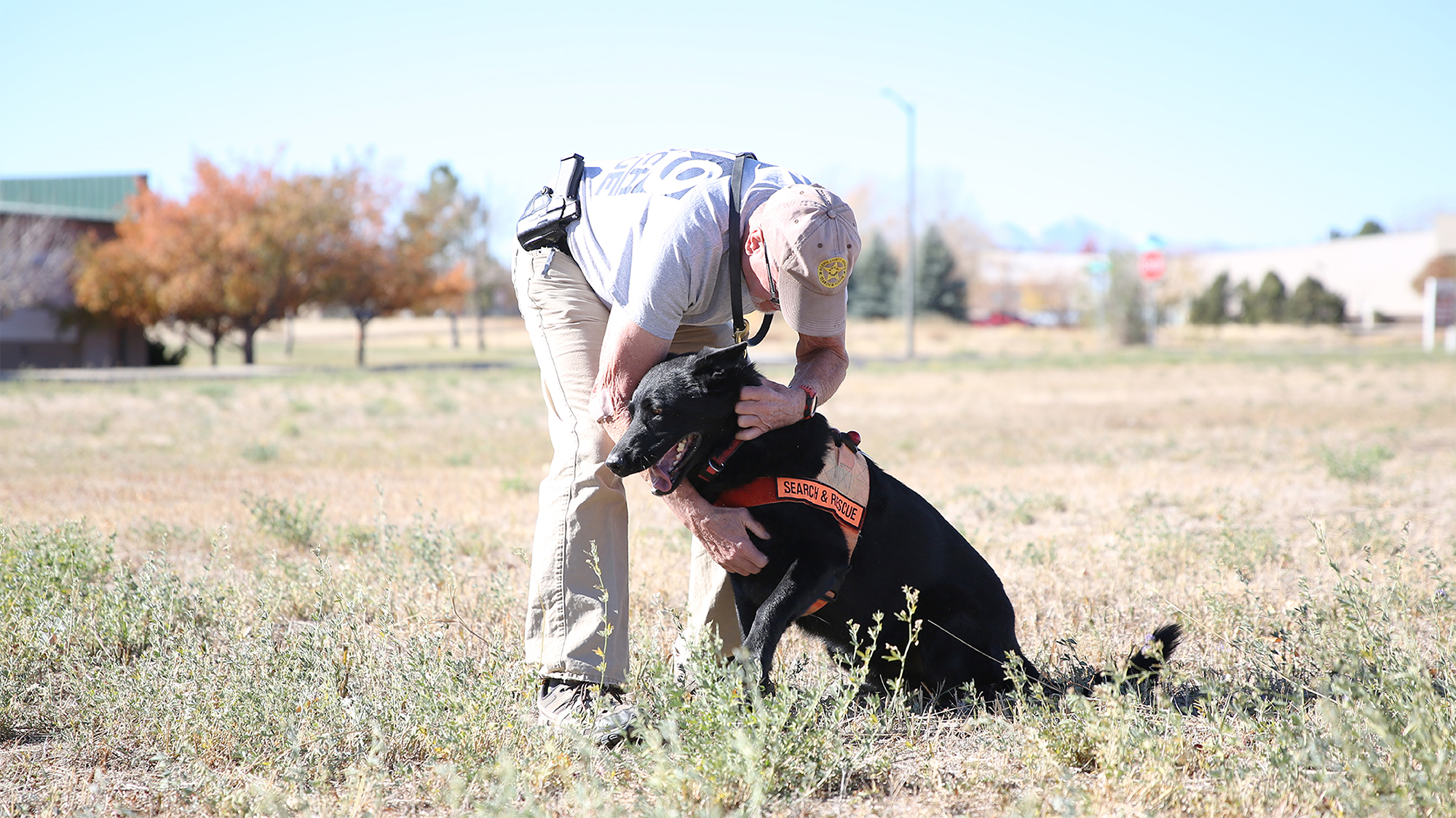 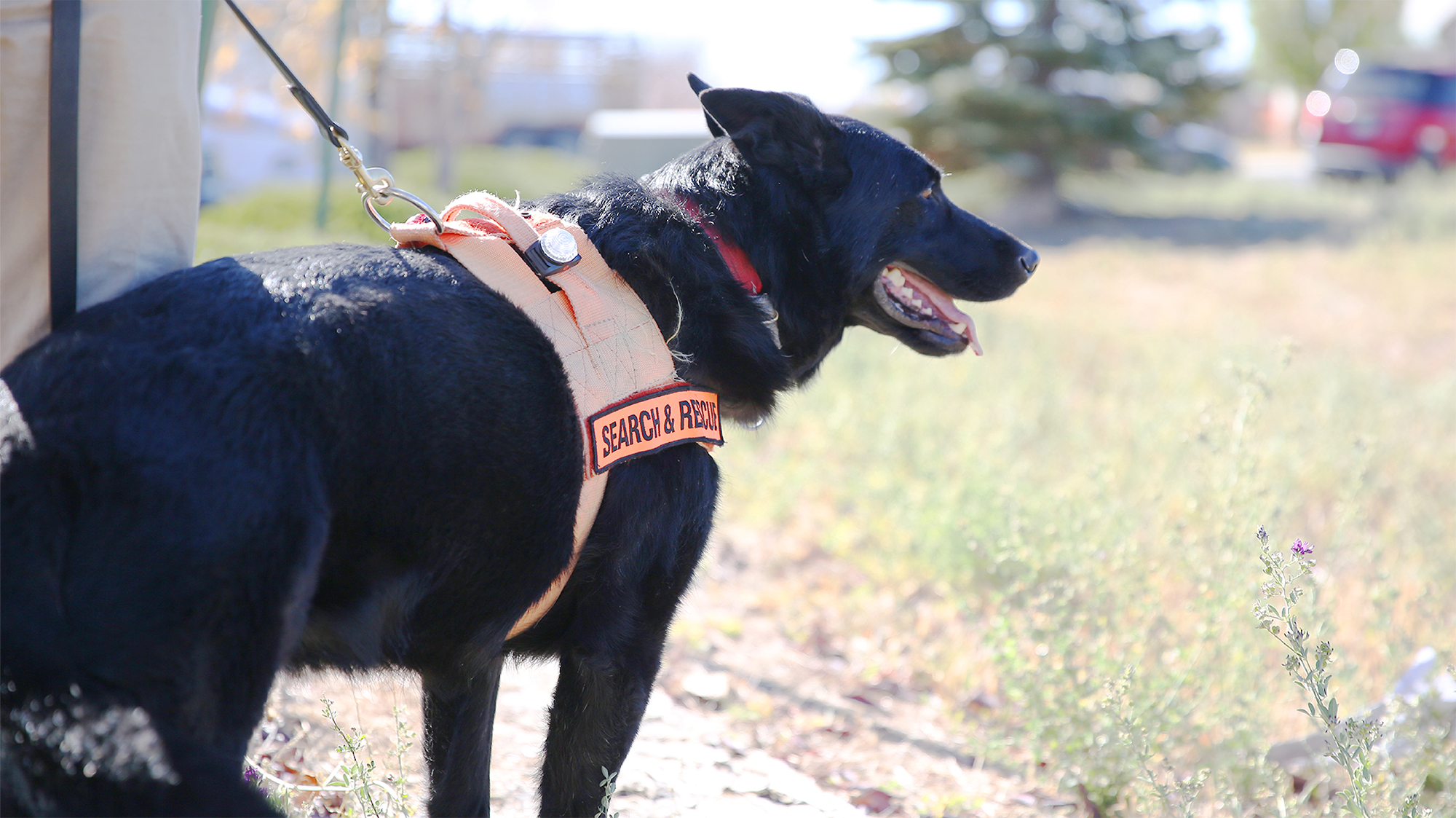 Pax, a 7-year-old German shepherd, works harder than the average dog. And he seems most happy when he’s working or training to work. To some, the work may sound sad or grisly: Pax is a Human Remains Detection dog.

His owner, Jerry Numon, has taken him on dozens of jobs and trains him nearly every day. When police officers and investigators have a lead on someone missing and presumed dead, they may call Eastern Wyoming Search and Rescue. Then Numon, Pax and Pax’s adopted dog brother, Scout, head off in Wyoming or across state lines to Colorado, Indiana, Nebraska, or South Dakota. The two dogs show up to sniff around for those lost and presumed dead in clearings, wooded acres or river banks. When they succeed, their work can give closure to grieving families or help police with cases.

And Pax is always ready to get to work. Numon says the German shepherd is a dog that leaps right out of the truck when the door opens.

Unfortunately, his zest to hit the ground running every day is what led to his injury and a trip to the team at VCA Veterinary Specialists of Northern Colorado in Loveland, Colorado.

'They said I needed to go to the neurosurgeon immediately'

“Pax is high-strung, off the wall,” Numon says. “His breeder said he was a dog nobody could handle, so she gave him to me.”

That energy was bouncing around in Pax in February 2019, when he jumped out when the truck door opened, made a quick turn, yelped and kept running.

“At first, I didn’t think anything about it,” Numon says. But then, Pax was crying more and more. Numon first took him to an orthopedic surgeon. The team at that clinic took Pax into the back for evaluation. A few minutes later, they hurried back to see Numon.

“They said I needed to go to the neurosurgeon immediately,” he says. Pax received pain medication, was carted carefully back out to Numon’s truck, and the two were off—the truck’s emergency lights on, but no siren.

Pax was wobbly on his rear legs and whining and yelping in pain. The toes on his rear paws had started “knuckling,” or rolling under, showing he’d lost some sensation or function in the paws.

At VCA Veterinary Specialists of Northern Colorado, neurologist Dr. Amy Komitor told Numon the choices were euthanasia or back surgery. An MRI on February 26th had confirmed degenerative disc disease: Three of Pax’s discs in his spine were pressing painfully on the spinal cord, causing pain and partial paralysis in his legs.

Numon had vowed to do everything he could for his working dogs. He agreed to the surgery and Pax underwent a multi-hour operation. Afterwards, Komitor told Numon she wasn’t sure Pax would work again. But the day after the surgery, Numon and Pax met the next medical expert in the German shepherd’s road to recovery: Carrie Adrian. 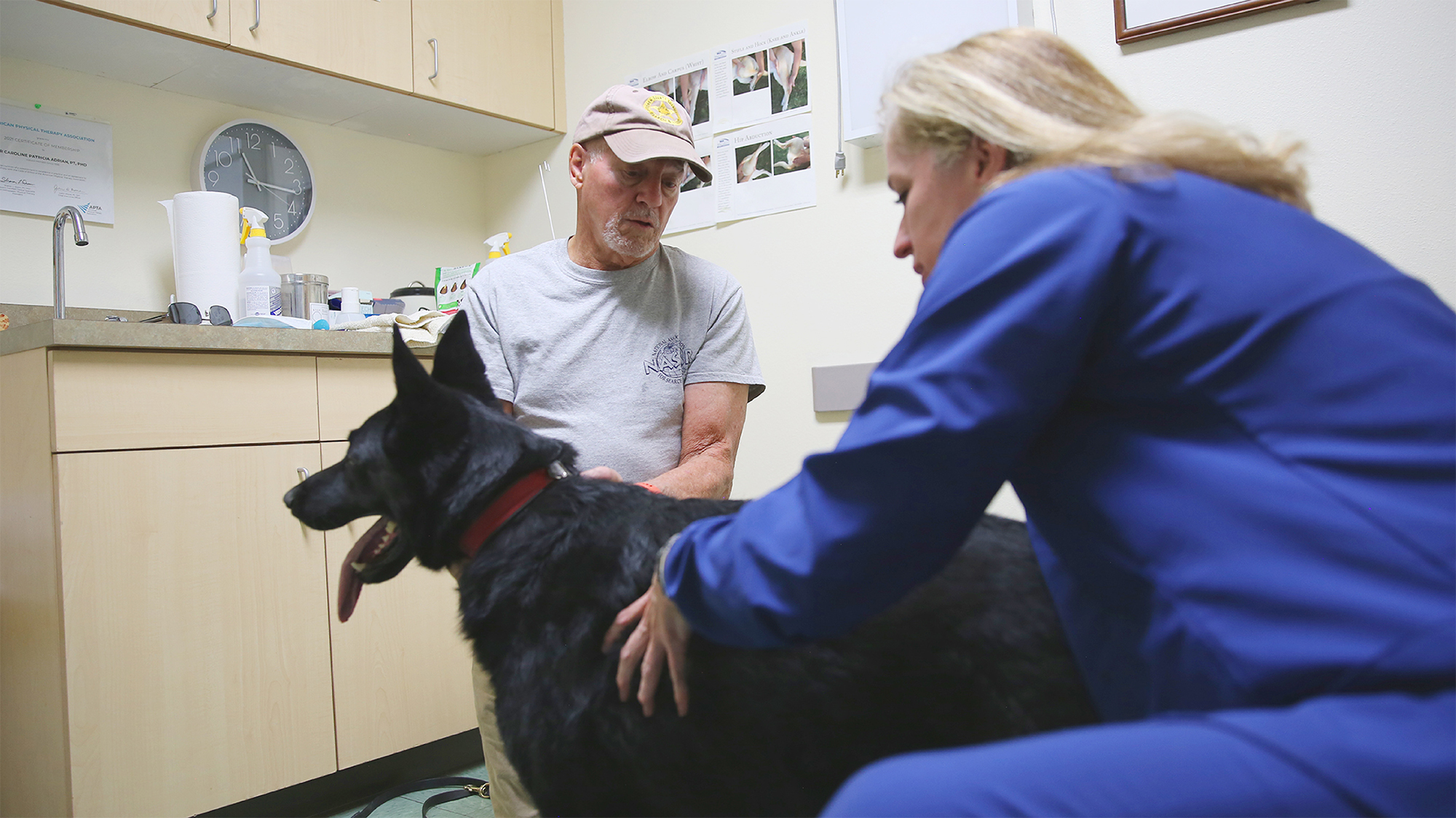 “It’s so important to start physical therapy and rehabilitation immediately after surgery,” Adrian says. “The sooner we intervene, the better results we have down the road.”

‘The longer you wait, the harder recovery is'

Adrian is the hospital’s director of rehabilitation services, with a Masters in physical therapy and a PhD in canine biomechanics. She wanted to get started right away. Even though Pax needed time to heal, physical therapy was implemented just a day or two after the surgery.

“It’s so important to start physical therapy and rehabilitation immediately after surgery,” Adrian says. “Animals’ abilities to adapt is remarkable,” she adds. The central nervous system (brain and spinal cord) shows remarkable “neuroplasticity,” or the ability to adapt and reorganize after big changes, like back surgery.

“The longer you wait after surgery, the harder recovery is,” she says. “The sooner we intervene, the better results we have down the road.”

While Adrian needed to give Pax’s body time to heal, she gave the working dog easier activities to do. Pax practiced standing, shifting his weight, and other static activities to get sensation in his hind legs. The team checked for sensory awareness and motor activity with Pax lying down, sitting or standing, as mobility slowly returned. Adrian says that repetition is key in therapeutic activities after neurologic injuries. Acupuncture and walking on an underwater treadmill helped, too.

Adrian says she worked hand in hand with Komitor and the neurology team to assess pain, function and healing, and progress Pax in his activities on the road to recovery: “Dogs like Pax, they’re happy to get moving. But it’s important to manage pain and make sure the dog is comfortable so we can do the best job.”

During weeks that turned into months, Numon drove Pax twice a week more than 170 miles from Wyoming to Colorado for the appointments. Eventually, the visits were weekly then every few weeks.

Immediately after the surgery, Numon spent months carrying Pax up and down stairs and walking him always on a leash to keep him from galloping at high speed. And, even now, Numon never lets Pax jump out of the truck—only hop back in.

Years later, Pax still returns to VCA Veterinary Specialists of Northern Colorado if he shows pain or has trouble moving. Everyone is always happy to see him, Adrian says: “I’ve worked with a lot of military and police dogs, and I’ve never had to muzzle Pax. He’s the biggest sweetheart you’ll ever meet.”

Pax doesn’t mind the visits either, until the very end, according to Numon: “When we’re leaving, they make an announcement that Pax is in the house, because he starts yelling and you’d think we were killing him when he has to go.”

Komitor and Adrian have shared warning signs with Numon to assess if a visit is necessary. To stay healthy and nimble, Pax does spinal stretching and exercises for his core muscles.

“I’m a big fan of spinal mobility,” Adrian says. “We get the spine moving by asking the dog to reach back and touch nose to trunk, nose to hip, nose down the leg, like they’d do to scratch an itch.”

Best of all, especially for the dog himself, Pax is still working. These days, Numon sends Scout out into the big fields. When Scout finds something, Pax comes in to confirm.

Pax still has the yearning to run and twist and race around, but Numon kindly restrains him as much as he can: “He’s kind of like me, spur of the moment, jumping in any time. I’ve had to teach him to wait to be picked up and set down to keep him safer.”

If Pax isn’t training, he’s doing obedience exercises or running around, with Numon at his side. Years more of happy, healthy, rewarding work wouldn’t have been possible without Adrian and Komitor, he says: “They’re my heroes.”

Spinal and mobility problems could be serious. If your pet is vocalizing and suddenly struggling to run, walk, or move around like normal, call your veterinarian or a VCA location near you. 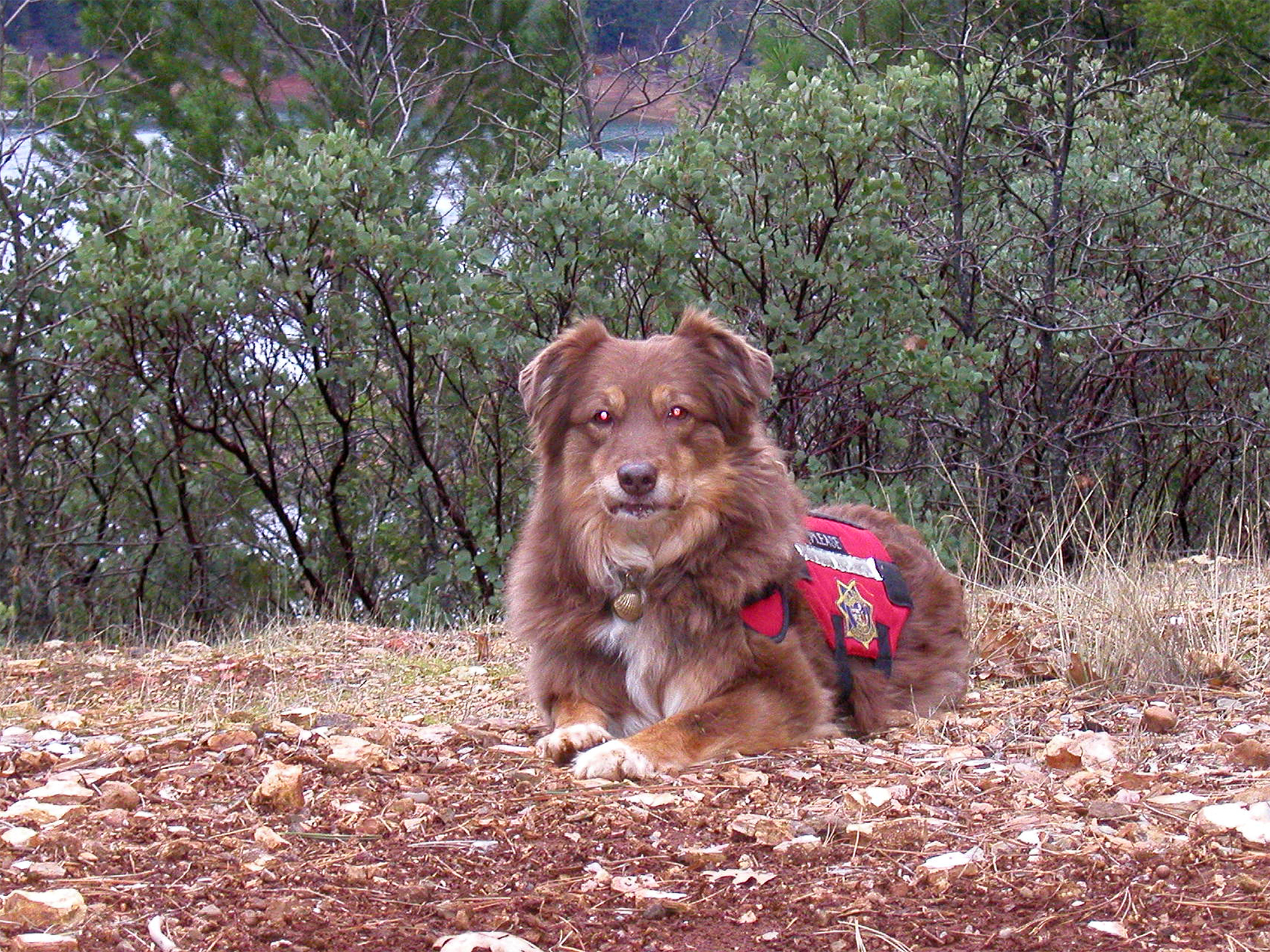 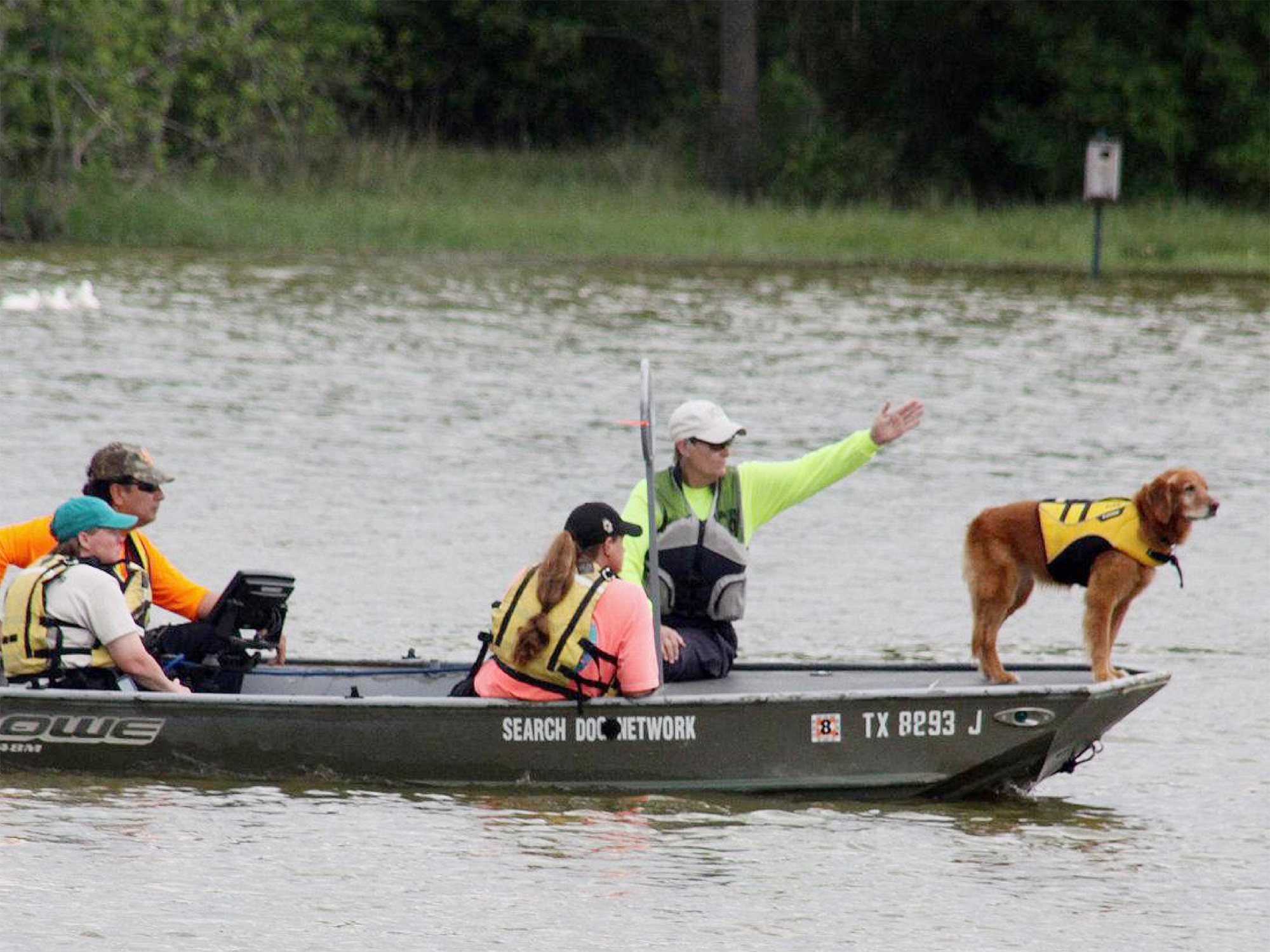 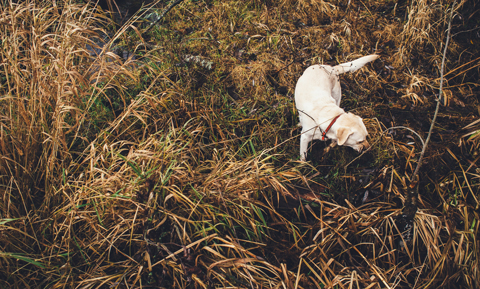